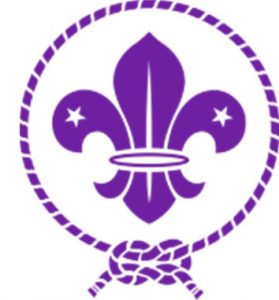 On my morning walks, I am constantly reminded of the Camino as I walk past the iron fences with the iconic fleur-de-lis incorporated into many of our modern fence designs. I find it fascinating how this symbol has spanned the ages, and has slipped into the 21st century with us (or myself anyway!) hardly noticing or thinking about its connotations with the past. It is everywhere! For starters, have a look at the World Scouting symbol (see right).

Most of us probably think of the fleur-de-lis as a symbol of royalty, heraldry and especially France. However the design can be found in many places long before heraldic times, even as far back as Mesopotamia. It came to symbolise royalty particularly in France and the High Middle Ages due to St Joan of Arc’s coat of arms and Louis IX. As rulers started to adopt the symbol and use it on their emblems (eg sceptres), saintliness became connected with royalty. It is to this day a symbol of France and continues to appear in the arms of the King of Spain. It has also become a symbol of other political systems eg Florence and Bosnia. 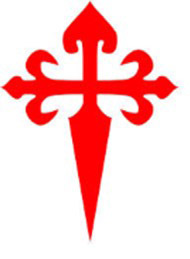 But back to Camino history… the St James cross (see right) was the emblem of the 12thC military Order of Santiago and is also called the Cross of the Knights of Santiago, as well as the Spanish Cross. Often this cross design bears a heart-like ornament on its top. The insignia of the Order of Santiago (originating with the Knights Templars, who were founded in 12thC and disbanded in the 14thC—google Friday 13th for more history!) is a bright red cross simulating a sword with the shape of a fleur-de-lis on the handle and on the arms. The cross of the Royal Standard had a Mediterranean scallop in the centre and another one at the end of each arm. Their symbol was a cross of St James, a red cross terminating in a sword, and a shell which they doubtless owed to their connection with the pilgrimage of St James. The three fleur de lis represent ‘honour without stain’ or spotless honour, in reference to the moral features of the apostle’s character. The knights wore the stamp of the cross on their banners and white capes, their initial objective being to protect the pilgrims of St James’ Way and defend Christendom. The sword represents the knightly character of the apostle and refers his martyrdom, since he was decapitated by sword. It can also symbolise taking the sword in the name of Christ. 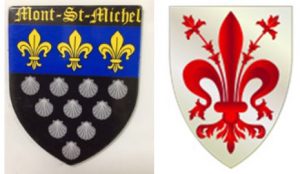 It is said that the form of the insignia originated during the Crusade period, when the knights took small crosses with the bottoms sharpened to be able to nail them into the ground and carry out their daily devotions. Interestingly, the Order of Santiago still exists under the Spanish crown with currently 35 knights and 30 novices. Applicants must have noble ancestry and be practising Catholics, of legitimate birth including parents and grandparents, and not be descended from non-Christians.

Now, the big question (for purists): is the fleur-de-lis a lily or an iris? There has been much discussion over the centuries about its true derivations. Although lilies are never yellow in the wild, some irises are. Lis means lily in French and is the plural of the Latin lilium, while in English, the iris was often called fleur-de-lis or flower-de-luce, not just because of its yellow colour but also because of its shape of the six petals, or leaves. Either way, the fleur-de-lis has been and is still used as a decorative design or symbol. Since it represented purity, it has long been associated with the Virgin Mary, although the colour changed from white to golden over time. Others debate it could also derive from the broom, lotus, or furze, while still others believe it represents a trident, an arrowhead, a double axe, or even a dove or a pigeon. The design itself with its three leaves/petals can be said to represent the Trinity or, in the reign of King Louis IX (St Louis), faith, wisdom and chivalry. However, a French historian also claimed it represented the medieval social classes: those who worked, those who fought and those who prayed.

Finally, in heraldry, the fleur-de-lis has been taken to symbolise all the Christian Frankish kings, most notably Charlemagne, who of course is connected with the Camino and is supposed to have walked it as well as fighting along its trail. 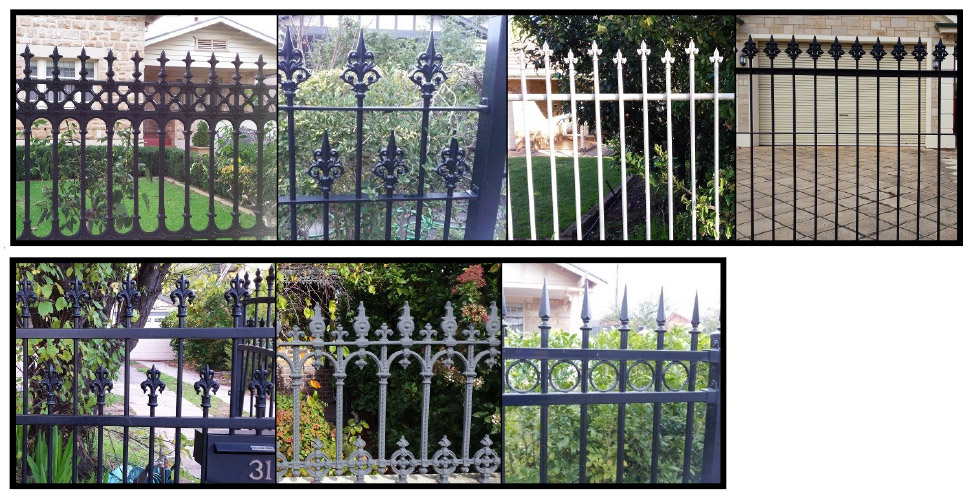 The fleur-de-lis is often placed on top of iron fence posts, as a pointed defence against intruders

Elsewhere this beautiful symbol appears on military insignia… on the coat of arms of many European countries and cities and in North America, the fleur-de-lis is often associated with areas formerly settled by France. In Mauritius, slaves were branded with a fleur-de-lis. It also appears in the logos of many organisations eg the emblem of the Scouting organisation where the classical description of the lis connects the compass rose with the purpose of Scouting’s principles—namely that Scouting gives one’s life direction.

Back to the modern day… in building and architecture, the fleur-de-lis is often placed on top of iron fence posts, as a pointed defence against intruders. It may ornament any tip, point or post with a decorative flourish, and indeed the derivations are delightful and almost endless. See how many you can espy when next walking along the streets around your suburb or town.