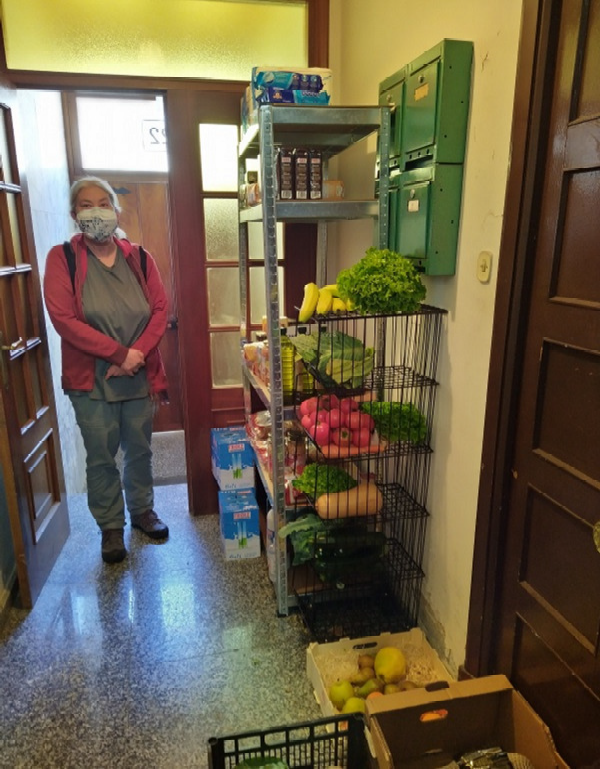 Sybille next to her pantry with box full of essential supplies ready to hand out
“Bringing it home¨ from the Camino is the focus chosen for the next Camino Conference, now to be held in 2023. We hope to explore the full circle of pilgrimage, including most importantly the return home and what we do with all the experiences we have had, the stories we have heard and the things we have learned.

Many people return home with a strong sense of wanting to ‘give something back’ which often means training to be a hospitalero voluntario and returning for a fortnight of service (or more) in one of the donativo albergues. For others it may mean donating directly to an albergue they especially liked. Sybille Yates is a German hospitalera who Rob and I met in 2001 when we arrived all wide-eyed at Navarrete albergue for our first posting as newly- minted ‘hospis’. Her matter-of-fact approach to things, along with her nursing background and raucous sense of humour, were a welcome addition to our steep learning curve. 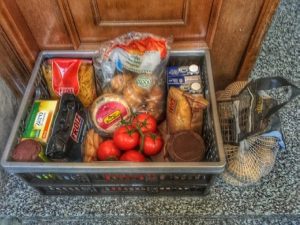 Now, 21 years later, Sybille lives permanently in Santiago de Compostela, having moved there in 2017. She quickly became part of the local pilgrim-related community when she opened her home – Egeria House – as a pilgrim drop-in centre and emergency accommodation as well as serving in the Camino chaplaincy. However, during the pandemic with no pilgrims arriving in Santiago, Sybille saw how many of her Galician neighbours were suffering from shortages of food and other supplies so she set up a community pantry at home. It started off as a cardboard box on her front doorstep for neighbours to bring and take from and has now grown to a hallway lined with shelves full of supplies. Once a week there is a supermarket delivery including many litres of milk and several large bottles of water. Other supplies include vegetable boxes from a friendly greengrocer who always ‘overloads’ the box.

There is also the ‘roundabout room’ for recycled clothes, shoes and toys for the children who include a new baby born in January. And even though chocolate Easter eggs are not a ‘thing’ in Spain, a few were produced to cheer the kids up. All this is done entirely from small donations to the community pantry, including a birthday fundraiser.

when we had lunch with her recently and discussed the community pantry, Sybille wanted to make it clear that she is not a registered charity but gratefully accepts any donations, which she records in a monthly report on her blog which is called ‘Egeria House’. For example, in March she received €407 euros in donations. She also stresses that donors should only give what they can afford and not use money that has been earmarked for other projects. You can follow the progress of the community pantry’s work on the Egeria House blog – egeria.house/blog/

Sybille is just one of a number of international expats living along the Camino ‘giving something back’. Most of you will be familiar with Rebekah Scott’s work with Peaceable Projects. Rebekah and Paddy believe in the power of pilgrimage to change the world for the better, one person at a time. Peaceable Projects refurbishes and helps to maintain donativo albergues all over the Camino, as well as sending volunteer hospitaleros to Grado (Primitivo), Canfranc (Aragonés) and Nájera (CF). They also run an annual clean-up operation every autumn along a nominated section of a Camino called the Ditch Pigs.

Ines Jewell (VIC)
(Written on 9 May 2022 in Santiago de Compostela, after walking from Moratinos to Triacastela)

Check out the pantry fundraiser link for further information: egeria.house/santiago-day-neighborhood-pantry-fundraiser