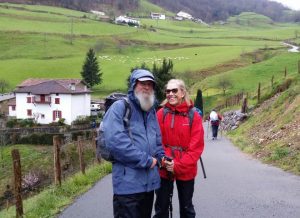 At Valdeviejas, just before leaving the urban landscape of Astorga, the Camino Francés passes the Hermitage of Ecce Homo. Opposite the chapel lies a small park with some maple trees. Beside one of these young trees stands a small stone plaque in memory of Ron Duke, my husband, lover and best friend, my beloved partner of 40 years.

In early April 2016 Ron and I set out from St Jean-Pied-de-Port, filled with excitement and anticipation. The Camino had been calling me for a long time, ever since I’d first learned of it while studying Spanish in the 1990s. After so many years of dreaming, and months of planning and training, our pilgrimage had finally begun. 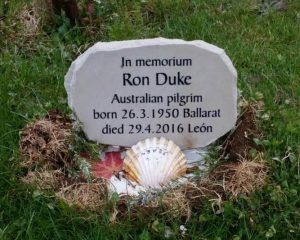 Beside one of the young trees stands a small stone plaque in memory of Ron Duke, my
husband, lover and best friend, my
beloved partner of 40 years

The Pyrenees crossing was wet and slippery with mud. We missed snow at Roncesvalles by a day, and were bathed in short-lived sunshine leaving Puente la Reina. As the days turned into weeks, a daily routine emerged. We’d walk together in the mornings, talking of things great and small, deep and trivial. Ron tended to fall behind after morning tea, and I’d wait for him at a lunch spot. After eating together, I’d go on ahead, put in some more kilometres, and find an albergue where we’d spent the night in the company of our Camino family. 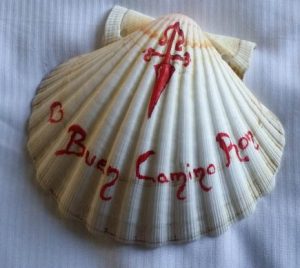 On Day 24 I limped out of Reliegos, having stubbed my toe on the ladder of the bunk bed. After lunch it was still painful. So Ron and I stayed together the entire day, walking at his pace into León. We’d planned a rest day there, and two luxurious nights at the Hotel Alfonso V, away from the albergue shower queues and choruses of snoring. Our arrival was sweet, the bubble bath heavenly. At a nearby restaurant we skipped the menú peregrino and had a fine a la carte three-course meal, then returned to our quiet room with its sumptuous queen sized bed. Ron was sleeping soundly when I turned out the light. No more than two hours later, quickly and without warning, he had a massive and fatal heart attack and never awoke. 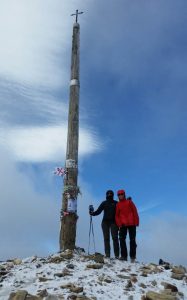 Our Camino family had disappeared into the city of León, or turned their backs on it and were already walking onwards to Santiago. But I was not alone. I was embraced by a new family: the wonderful staff of Alfonso V. They supported me with practical help and loving kindness; were unfailingly sensitive, compassionate and gracious in the face of death.

Throughout this ghastly time I had no doubt that I would continue the Camino. It was something I clung to. I would walk for Ron as well as for myself. 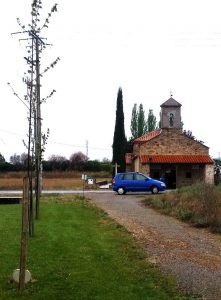 Ron’s tree near the Ermita

When the time came to leave León, I set out early before the sun had risen. The rain-damp pavement threw up stark reflections of street lamps; my footsteps echoed off the hard surfaces of buildings and empty streets. This I could do: follow the yellow arrows, put one foot in front of the other, stop for food and rest. That’s what pilgrims do: walk, eat, sleep. There is no personal history between us, but we share the collective history of the pilgrimage. We can tell our stories and listen to the stories of others, but it’s okay to be silent too. Here I could carry my pain without need for explanation or fear of judgement. I had a simple daily routine, companions who looked out for me, and sanctuaries, both natural and man-made, for solitude. This was a fit place to grieve.

Again the days passed and then the weeks. I stopped in every church and chapel, lighting candles for Ron, saying silent prayers, weeping in the quiet presence of the saints. My inside was a raw wound, a gaping hole, but on the outside I was just another pilgrim. There was comfort in this. I found a new Camino family, and reconnected with some members of the old one, and a Camino angel found me, and saved me many times. 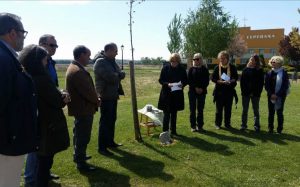 In the misty mountains and green hills of Galicia there are many memorials. I stopped by each one, read the inscriptions, and paid my respects to those who, like my Ron, had died on The Way. And there I decided that he too should have a memorial. This was something I could contemplate beyond walking, eating, and sleeping; something beyond Santiago.

A year later I returned with Ron’s sister, my dear sister-in-law, Liz. We started our Camino in Burgos, aiming to reach Astorga in time for Ron’s anniversary. We slept in villages other than those where I had stayed with Ron, but I saw him everywhere. He was sitting in that bar where we’d stopped for coffee, on the bench where we’d patched a tender foot, beside the fountain where we’d filled our water bottles. 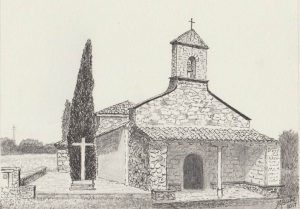 Approaching León my feet grew heavy and I fought to contain a howl of dread that verged on panic. We wouldn’t stay at Alfonso V; that seemed too hard. However, after checking in elsewhere I could not delay my return. In the foyer everything was as it had been, except for the unfamiliar person on reception. But soon my old friends were there, welcoming Liz and me warmly, holding me once again as I collapsed under the weight of raw grief.

I dreaded leaving León, reviving memories of that ghastly day almost a year before, yet I would not take the option of going by bus. I needed to walk. We left late to make it different, easier, but I soon realised it didn’t matter. I had little recollection of that landscape. Last year I was alone and in shock, just following the arrows and placing my feet. This time I was not alone, and we had a memorial service to attend.

In Astorga, on the day before the anniversary, Liz and I met up with our friend, Inés. The next morning we were picked up by Rebekah, who had been instrumental in transforming Ron’s memorial from an idea into a reality, and was going to conduct the blessing service. The rain held off. Witnesses and friends from near and far gathered, a beautiful and moving service took place. Afterwards we celebrated with cocido maregato – a rich and indulgent meal that is not for the faint-hearted, and would send a vegetarian to despair.

We said our goodbyes and the following day, Liz and I continued our Camino. A new lightness was upon me. I realised how far I had come since last year; that I was finding joy as well as comfort in this sacred landscape. And I saw my pilgrimage extending beyond Santiago. 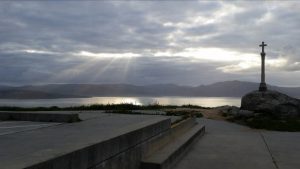 Two weeks later I bade Liz a temporary farewell and set out on the Camino Finisterre. Alone but not lonely, I felt strong and joyful, and I went at my own pace. Having walked The Way to Santiago de Compostela a second time, I was now following another ancient path, one that was completely new to me – a Way that led to the future. 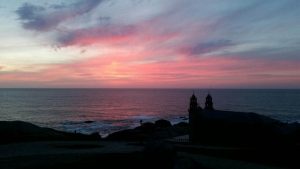 On the second day I fell into step with a young woman, a Camino daughter. Mist cleared and the sky was bright as we walked into Finisterre, where Liz was waiting. We three continued on to Muxía, and watched the sun set on our Camino. Though the dark, sad times were not at an end, that sun would rise again each day to light the way through my new life that was full of inspiring possibilities. 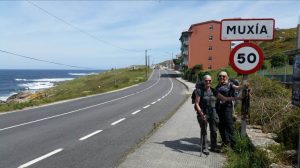 I suspect I may return to the Camino many times. I’ll return to Valdeviejas to visit Ron’s tree in different seasons. I hope it will grow strong and long, and witness the passing of future pilgrims, perhaps our children and grandchildren will be among them. But all things that live must die and change is inevitable. The tree has received blessings, ashes and tears, for now it grows beside a stone that marks the passing of a life well lived, a soul well loved.

To those who read this and later find themselves walking the Camino out of Astorga, I bid you to pause a moment at the Ermita de Ecce Homo and visit the park and its maple trees. If you first enter the chapel, walk straight ahead when you leave, don’t immediately turn left and back onto the Camino. Spend a quiet moment there, say a prayer, spare a thought for all the pilgrims who will never reach Santiago, among them Ron. He is in good company.