In June this year, the Australian Institute of Health and Welfare released its report Incidence of suicide among serving and ex-serving Australian Defence Force personnel 2001–2015. One of the reassuring conclusions from the report, which drew on data collected over the past fifteen years, was that serving members of the Australian Defence Force (ADF) are far less likely to commit suicide compared to the general population. Men serving full time or in the reserve had age-adjusted suicide rates 53% and 49% lower than all Australian men.

The not so good news from this report, however, was that the suicide rate of Ex-serving men (there was no data for ex-serving women) was more than TWICE as high as serving men – and 14% higher than their counterparts in the general population. This is certainly a cause for concern. Why this high rate of suicide – which by implication indicates a high rate of mental ill health – in Australian veterans? Why are so many soldiers – not just in the ADF but in armies all over the world – lost when they leave the Military?

There is already much research to indicate that veterans often experience a sense of vulnerability and social isolation, which can be attributed to their having been separated from systems and people they relied upon for years.

In his book A Soldier to Santiago (see review on page 23), US Navy Veteran Senior Chief Petty Officer Brad Genereux wrote: “For over 22 years and with pride I represented my country by wearing the uniform of my nation. And when my service was all over? Life had passed me by and I found that I fit in – nowhere.” Genereux has founded ‘Veterans on the Camino’, a project designed to help suffering military veterans achieve  healing  by  undertaking  a  journey  along  the Camino de Santiago.

If one were to ask “what is a pilgrimage?” the obvious definition would be “a journey to a place in the belief that a duty will be fulfilled, a wish will be granted or sins will be forgiven”. This includes pilgrimages made, for example, by Christians to Jerusalem, Lourdes or Santiago, Muslims to Mecca, Hindus to the source of the Ganges and Japanese Buddhists to the various historic temples on the island of Shikoku. 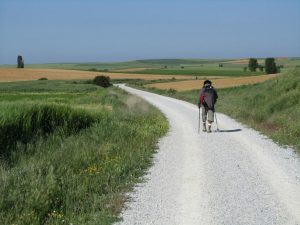 But a pilgrimage could also become a journey away from home in search of spiritual wellbeing – seeking inner peace through physical journeying. Unfortunately, although the topic of pilgrimage has been explored by scholars within the disciplines of anthropology, archaeology, sociology, and religious studies, there has been very little research studying the psychological and emotional implications of pilgrimage on individuals.

A strong motivation for many pilgrims is the desire for healing – and the healing process that occurs on pilgrimage is not one that cures physical ailments but rather addresses the human experience of loss and suffering. Pilgrimage also provides a communal structure of similar individuals who move through rituals together – so that the healing dynamics of a pilgrimage include not simply a physical journey with physical, social and symbolic effects but also an act of personal empowerment and a sense of solidarity with a community of fellow pilgrims. And it is this Inner Peace that a pilgrimage along the Camino can help someone suffering from the mental battle scars of war to achieve.

How exactly can undertaking a pilgrimage along the Camino help veterans?

Identity Transformation: The shock of leaving behind one’s military identity can be profound. Wearing a military uniform allows one to “walk tall”. Sadly, the day a soldier has to give up his uniform, he becomes just another civilian struggling to make his way in an unfamiliar world. Inherent in the pilgrimage journey is the adoption of a new identity – ‘pilgrim’ – and the sharing of the journey’s hardship with other pilgrims.

Tradition: Walking this ancient trail, which pilgrims have traversed for over a thousand years, one becomes aware of all those who have moved along this ancient space – just as in the military, one wears a uniform, a beret or particular headgear which are badges of honour that acknowledge and respect those who have gone before.

Action: Soldiers miss the “Situation, Mission, Execution” type of action that goes with being in the military. The pilgrim journey provides a shared direction of movement towards a common End-state – while the side by side progress along the Way, reminiscent of soldiers doing PT, drill, weapon cleaning etc. together, engenders sharing and support as they move together to achieve the envisaged Goal.

Community: Walking in the company of others who are on a similar quest and so becoming part of a community (“We are all in this together!”) brings about a sense of mutual RESPECT. There is a readiness along the Way to “help a mate” through illness and injury – and there is always the opportunity, over a glass of beer or a copa de vino at the end of a hard day’s walk, to share stories and experiences.

A pilgrimage along the Camino can bring back the Joy and Camaraderie of old times, the Respect and Sense of Purpose that was treasured and the Self-esteem that was lost. Walking along this ancient trail one experiences views of snow-capped mountains, groves of majestic leafy trees or tranquil lakes. The world and its travails seem a thousand miles away. One feels so very small, and yet one feels a part of Humanity – and a part of the Universe.

A pilgrimage to Santiago, admittedly, is not for everyone – and is not the only way to help veterans suffering from loss, mental scars, PTSD and grief. But   the therapeutic value of pilgrimage has been well known over the ages – and walking the Camino de Santiago, I am sure, will help veterans who are struggling to find themselves, to achieve not only spiritual healing but also mental peace.

Major Sanjiva Wijesinha MBBS (Ceylon), MSc (Oxford), FRCS, FRACGP served as a medical officer in the Sri Lanka Army Medical Corps for 11 years and subsequently in the Royal Australian Army Medical Corps for 15 years. Currently an associate professor at the Faculty of Medicine, Monash University, Melbourne, Australia, he is the author of Strangers on the Camino and Not Our War.