The Iberian Peninsula is a land rich in history, tradition and superstition. Portugal and Spain being “Catholic countries” share many of the same holidays and religious festivals. There are also many legends, some based on vague historical facts, others coloured with religious connotations. You may wish to take these into account when planning your Camino either to avoid them or to see them!

First of all I’d like to introduce you to some of the festivals I’ve come across on my travels and Caminos throughout Spain and Portugal.

“Why”, you may ask yourself, “do up to 300 couples get married on the same day and often in the same ceremony on St Anthony’s Day in Lisbon in Portugal?”

The answer lies in the story of Saint Anthony who was born in Lisbon. He became known as a great miracle worker and also for his skills at reconciling couples. In Lisbon the festivities in his honour begin on the evening of June 12 with displays of walking groups and singers and parades and a custom is for young people to write letters on that day asking Saint Anthony to help them find a partner. Then on the 13th, Saint Anthony’s Feast Day, as evidence of how effective this is, traditionally 13 couples get married together with all expenses being paid by the city council. But as happens one tradition led to another and for years on this feast, it became the fashion for hundreds of the Noivas de Santo Antonio’ (Brides of Saint Anthony) to get married on the same day (see above). 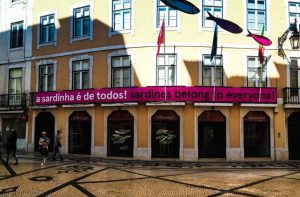 At the same time the Sardine Festival takes place and this is replicated elsewhere in Spain and Portugal in different places and at different times. On the Feast of Saint John in Galicia, the people jump over bonfires (Oh yes they do!) and eat grilled sardines provided by local restaurants for free. A close relative of this takes place in the south of Spain in Malaga and Murcia and other towns when there is the Burial of the Sardine to mark the end of the excesses of Carnival and to herald the start of Lent. Sardines, it seems, are ubiquitous. 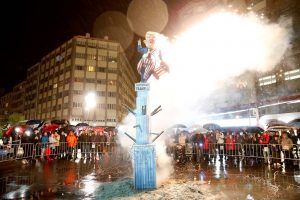 Many Hispanic festivals end when the symbols of the excesses which have been enjoyed are ceremonially burned. There is also, at the end of Carnival, the traditional Quema del Raspajo when an effigy is burned to represent regeneration and freedom (see left, below). Often this is used to poke fun at the political order as happened in Santiago last Ash Wednesday. 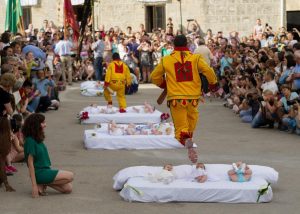 Other festivals are more difficult to understand. My favourites of these are the Baby Jumping Ceremony in the province of Burgos and the Festival of Near Death Experiences in Galicia. Both cause visitors to gasp in either amazement or anxiety! Baby Jumping, or El Colacho as it is known in Castrillo de Murcia, in the province of Burgos, takes place every year around the Feast of Corpus Christi which is usually celebrated in May or June (see below). The tradition dates back to the 17th century. During the ceremony men dressed as the Devil (the Colacho) in red and yellow suits jump over babies born during the previous 12 months who lie on mattresses on the ground. This is known as the jump of the devil, El Salto del Colacho. The ‘devils’ carry whips and castanets as the jump over the fortunately unaware infants.

The point of the ceremony is to cleanse the babies and drive out any evil spirits to prepare them for life. It is said however that Pope Benedict asked local priests to distance the church from the Jump of the Devil because the Catholic Church teaches that it is baptism and not jumping over babies which anoints children for the Christian life. Imagine! 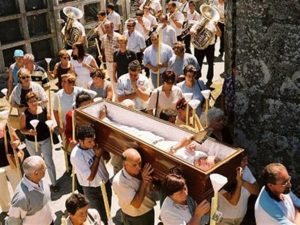 However weirdest of all in my book is the Fiesta de Santa Marta de Ribarteme, also known as the Festival of Near Death Experiences (see right). It takes place in a small Galician village on the border with Portugal – Las Nieves, Pontevedra on 29 July. Here if you are suffering from a grave illness and wish to pray for recovery or if you have already recovered from near death and you wish to give thanks, you rent a coffin, get inside it and your friends and relatives carry you through the village in procession, before laying you before the altar in the local church where you remain during Mass! 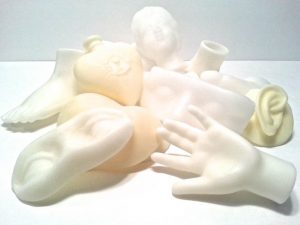 At most of the festivals described here there may be stalls selling everything from fresh donuts to wax body parts. Yes, body parts. These are called Ex Votos, votive offerings to add to your prayers for recovery from an ailment to your hand, head, leg… Strange they may seem but they aren’t restricted to Catholicism I have seen them at Hindu temples in India and Buddhist shrines in Japan. For me they are still strange! 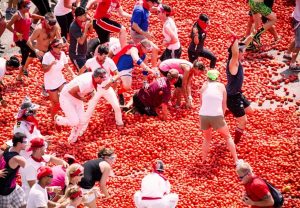 So if you are passing a church as I did the other day and you notice policemen lined up in dress uniform wearing white gloves don’t be surprised if it is the Feast of Guardian Angels – the patrons of the National Police. It was!

These feasts and holidays are observed in both countries except where otherwise indicated. Where the languages are different the names are given first in Portugese then Spanish.

Local Festivals and holidays in Portugal and Spain

Almost every village seems to have their own Feast (Feria) e.g. the Feast of the Ascension, which is the annual festival in Santiago de Compostela with street theatre, bands, orchestras and the circus comes to town. 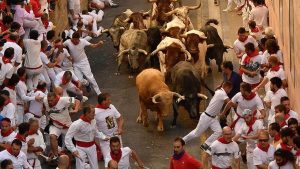 Running of the bulls, Pamplona

In towns and villages all along the Camino Francés you may encounter a local festival such as:

And finally… If you are walking the Camino Levante and find yourself in Valencia at the end of August head for the town of Buñol to take part in the world’s largest tomato fight. If it is a choice between running with the bulls or fighting with tomatoes I know which I’d choose!