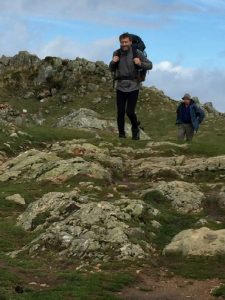 While the way is not paved with gold, there is a range of ‘treasures’ along the Camino Francés that enhance the experience of any pilgrim and the treasure comes in many forms.

I was introduced to the Camino in 2015, accompanying two friends who had done the walk four years earlier. I arrived in St Jean-Pied-de-Port somewhat the worse for wear, still suffering from jetlag and not having had a decent sleep for several days. So desperate was I to get some sleep, I thought it might be a good idea to have a few drinks the night before. The problem was that I had those drinks with some Irishmen. As far as getting some sleep went, I achieved my goal, sleeping for around six hours but when I woke in the middle of the night, I knew the session would come back to bite me.

We arose to steady rain, donning our wet weather gear and with me shouldering my backpack of 15kg, we set off. It wasn’t long before I began to ask myself “What the hell are you doing here?” Why the 15kg backpack? I planned to record the journey on film for an amateur documentary and apart from a couple of cam- eras I carried a tripod. The tripod was a source of great amusement to my travelling companions, with one threatening to “chuck it into the bush”, if he could get his hands on it. I wasn’t about to part with it – I was on a mission and I envisaged the tripod playing a pivotal role.

After leaving St Jean-Pied-de-Port, a journey of self-discovery awaited. Rain was still falling and with a heavy backpack, wet weather gear and a hangover, I was in big trouble. When we finally arrived in Roncesvalles after the demanding trek, upwards and across the Pyrenees, it had been an unforgettable day for all the wrong reasons. It had been one of the toughest days of my life.

Memories of the demands of that first day soon began to diminish as we entered Pamplona. The week-long festival of San Fermin has been moved to July, when the Running of the Bulls takes place but towns and villages throughout Spain still celebrate Saint Fermin’s birthday on 25 September. Late that after- noon, we found ourselves caught up in a pro- cession through the town, where numerous three metre high mannequins were paraded, dancing through the town, twirling and moving to the music of a street band. 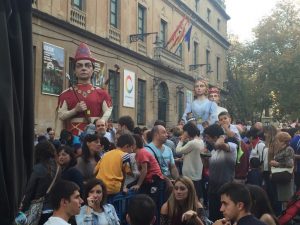 It was an exciting introduction to the magic that would be encountered along the trail. That excitement continued the very next day on entering Puene la Reina, a village situated at the crossroads of two Caminos and entered by crossing the spectacular Bridge of the Queen over the Arga River.

First impressions were deceptive. The inhabitants there were also celebrating the fest day of St Fermin and on entering the village we were met with scenes of families dining at long tables in the streets. Venturing further into the village however, it became evident that planning was underway for something more dramatic, later in the day. The town square had been boarded off into a mini Colosseum.

From what could be gleaned from posters, there was to be an event similar to the Running of the Bulls and, at the appointed time, the makeshift stands around the square were filled with both locals and pilgrims.

Another street band preceded the action and there was plenty of action. The young men of the surrounding area tested their daring as two cows at a time were run down a road and into the barricaded square. I could not imagine events in Pamplona being any more exciting as cows with very sharp horns narrowly missed young men as they made their escape over barricades. The entertainment continued for two hours and, with front row seats, the adrenalin was flowing. 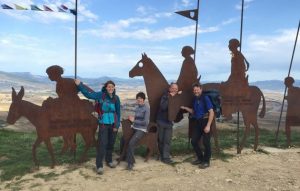 At the Alto del Perdon

The excitement levels could not possibly be maintained as we headed towards Santiago – if they had, many other treasures might have gone unnoticed. The Camino caters for all, no matter what riches are sought. Beautiful centuries-old cathedrals and churches are in abundance in the major cities and larger towns, but even some tiny villages had ornate churches tucked away that were well worth a visit and history lessons were around every corner. There are times when the track can be seen winding kilometres into the distance with very few other pilgrims in sight, the solitude on offer a time for reflection and on conquering these sections, a sense of accomplishment.

Of course, there is always the ever-growing pilgrim family, the fraternity that evolves as kilometre after kilometre disappears beneath feet, to the accompaniment of the tapping of walking poles as the distance to Santiago erodes. Total strangers before the beginning of the walk are firm friends by the time Santiago is reached. Friendships are made, which will endure for many years.

At Logroño, in the Cathedral of Santa Maria, there is an image attributed to Michelangelo. Works of art are plentiful along the way. The Camino traverses the renowned wine growing region of the Rioja that enhances an appreciation of Spanish wine that lingers long after leaving Santiago. Even the flat-to-undulating Meseta has a unique appeal and with less historical, scenic and exciting distractions, it offers opportunities to get to know fellow pilgrims even better.

In Astorga there are fine examples of the work of renowned Spanish architect Gaudi and along the journey, numerous opportuni- ties to partake in the pilgrim communal dinners and the camaraderie they offer.

After the second hardest climb of the walk, entering into O’Cebreiro, pilgrims are rewarded with visions of unique thatched cottages in the ancient Celtic tradition. The exposure to treasures continues all the way to Santiago. 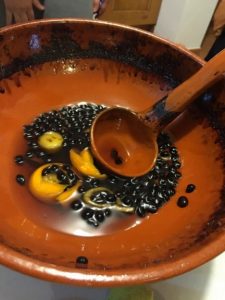 On the last night before reaching the city, a minor Camino miracle occurred. The one night accommodation had been booked in advance—it proved to be in the middle of nowhere. There were no shops to purchase food and it appeared the group might go hungry. We should have known better. The Camino provides. The hospitalero offered to drive some of our largish family to a supermarket. They returned with more than enough provisions and with two chefs in our midst, a final feast was soon prepared. And to top off the night we were treated to a display of the Queimada ceremony. Spectacular! The night proved to be one of the best of the journey.

We had planned our entry into Santiago to coincide with the swinging of the botafumeiro ceremony inside the Cathedral. Another remarkable visual treasure.

And yes the tripod did come in handy. Once. Before leaving Australia two friends who were intrigued by my upcoming journey invited me around for dinner. During the night that said they wanted to make a contribution to my journey and pressing ten dollars into my hand, told me that around eleven o’clock one day of the journey, I should take time to pause and have a coffee on them. I said I would record the moment. The trouble was, we never seemed to be near a coffee shop at eleven. One day I improvised and decided to film a cheerio at that time and, with the aid of the tripod, I was included in the shot. It is a multi-national cheerio and a great memory.

Would I carry a tripod several hundred kilometres for just one shot again? Therein lies a story! On another journey two years later from Le Puy to St Jean, I again packed a tripod and this time a tent. I did get to use the tent a number of times but alas, not the tripod. After drinking what turned out to be some ‘dodgy’ water and feeling off-colour, my travel companions suggested I lighten my load. Of course, at the top of their hit list was the tripod. It was a lighter, cheaper version than the one carried on the Camino and had already started to show signs of wear. It was laid to rest with due ceremony. The tent narrowly escaped, to live another day.

There are pilgrims who scoop up armfuls of the treasure along the Camino and return home energised, while others return home with regrets and Camino blues, because of what they have had to leave behind. Some experience both emotions. Many realise, on reaching Santiago, that this amazing journey has not come to an end, but is just a beginning. That the experience is a gift that keeps on giving. 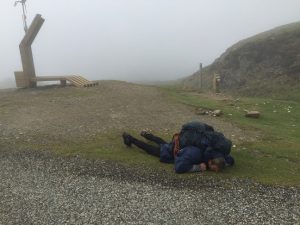 Kissing the ground at the top of the Pyrenees

Perhaps I am blessed. Perhaps because I was living in the bush with only my dog for company at fifteen, surrounded by alcoholics and what would be termed today, homeless men, I have been conditioned to appreciate certain aspects of life a little more than others. When life presents me with gifts, I embrace them, thanking both my lucky stars and anyone who might have made obtaining those gifts possible.

I too felt sad when the wonderful journey was over and, had it been possible, would have been glad to return to St Jean and start the journey again to relive the experience. It is an adventure I hope to repeat at some stage but if it doesn’t happen, I have big backpacks from both the Camino, the Chemin and another smaller one from the Grampians, that are chock-full of colourful treasures that will sustain me for the rest of my life. Yes there are blues amongst those colours – bright, lustrous, psychedelic, dazzling blues – but none the shade of the Camino blues. They appear to be magic backpacks, because no matter how much I share those treasures around, the backpacks never empty and I have shared those treasures on numerous occasions.

On returning home, I edited and produced ‘A Taste Of The Camino’ which I have shown, and still show, to anyone interested—this includes organisations which have used it as a fundraiser eg venues like the local library, Probus clubs, my garden club, small gatherings and churches. Thus I have revisited the adventure many times and, on occasions, I have just sat quietly and watched it on my own.

I know of people who have walked the Camino since viewing my interpretation of the treasure to be found along the Camino and I hope, in some small way, the sharing of my Camino experiences helped them to have their own wonderful adventure. 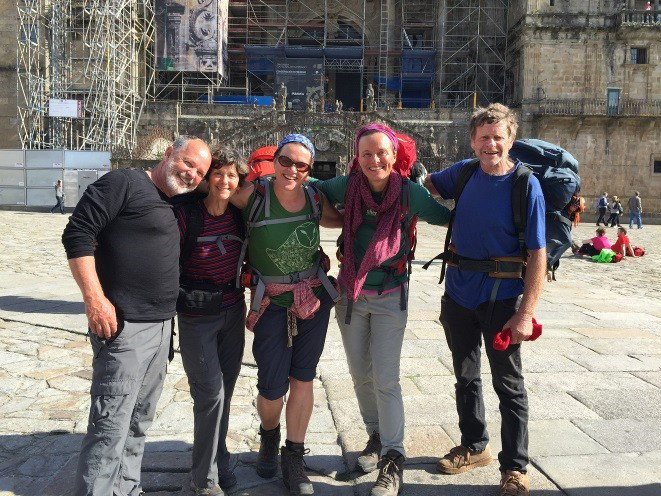 The jubilant Camino family arrive at SdC! L-R: Ian Wilson, Judy Dans, Tuija and Sari (both from Finland) with Wally
Australian Friends of the Camino