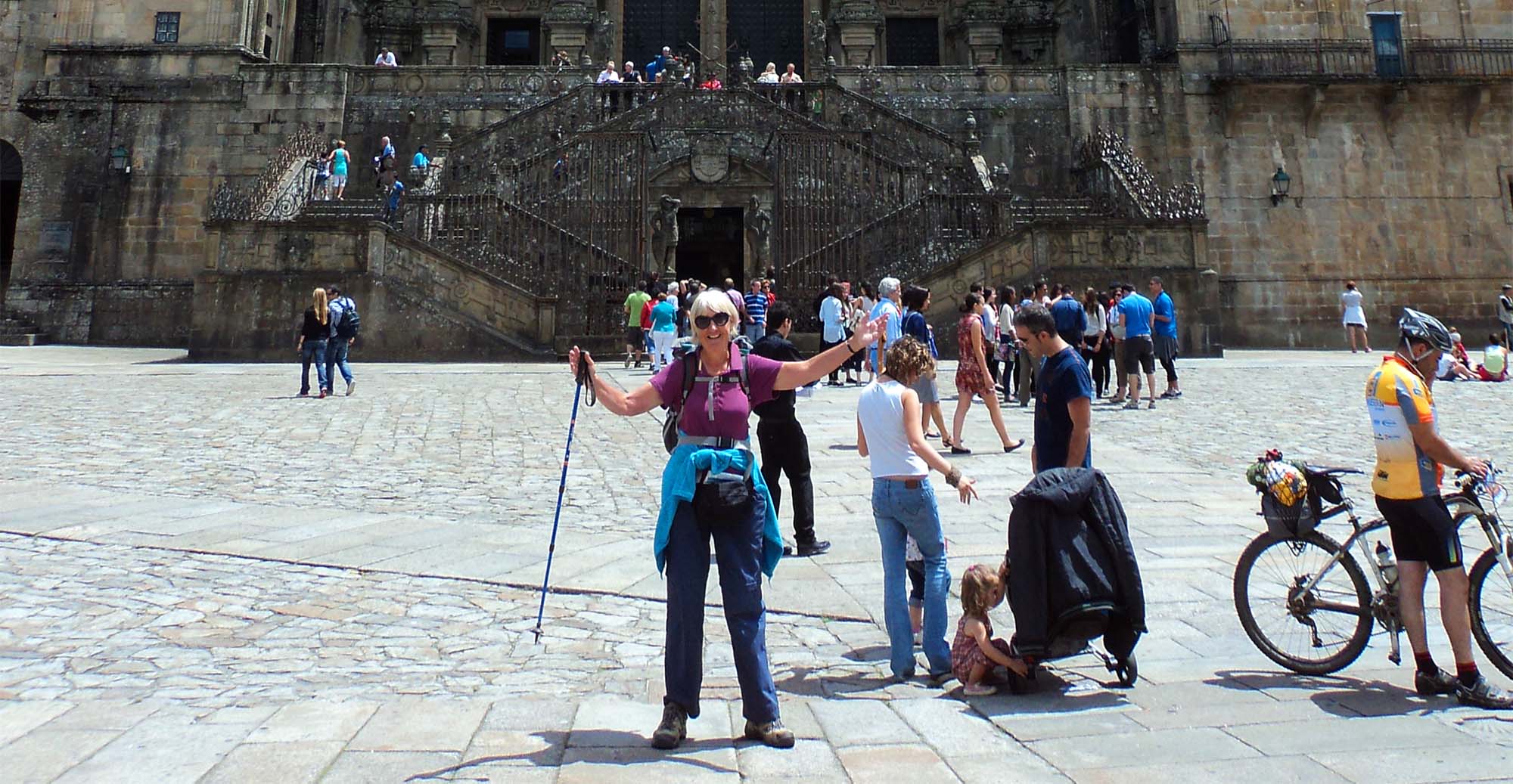 Back view of the Cathedral taken from the roof

The great Cathedral of Santiago de Compostela dominates the medieval city. As other buildings were constructed over time none were allowed to be higher than the towers of the Cathedral. Legend has it the Cathedral is the burial place of the remains of St James the Great, one of the apostles of Jesus. It is the destination of the pilgrimage routes also known as the Caminos to Santiago along which pilgrims have travelled for many centuries. In modern times the pilgrimage has seen a revival and in 2012, 198,000 pilgrims who travelled the last 100km on foot or on horseback, or 200km by bicycle, received the Compostela, the traditional certificate from the Cathedral. When the Feast of St James (25 July) falls on a Sunday, this is designated a Holy Year. A special door called the Holy Door (Puerta Santa), which is sealed at all other times, is opened during this year. 2010 was the last Holy Year and it is said 12 million people visited the Cathedral amongst which were 272,000 pilgrims who received the Compostela.

The Cathedral is a Romanesque structure. Building commenced in 1075. There are later Gothic and Baroque additions.

There are number of places to visit within the Cathedral and its precincts. Details are available on the website. There is also an audio tour in many languages. You can rent earphones inside the door of the Cathedral which enters from the Praza Praterias. The Museum of the Cathedral was opened in 1930. There is much to see. There is access to the Cathedral cloister, in which Cathedral canons continue to be buried; parts of the original Archbishop’s palace; and, a balcony on the third floor overlooking Praza do Obradoiro and nearby buildings. In the Museum there is a large tapestry collection in addition a display of vestments. Valuable church artefacts can be seen in the Treasury.

3. The Cathedral Roof and Archbishop’s Palace View from the Cathedral roof There are regular visits to the roof of the Cathedral where you actually walk on the roof. The views of Santiago are magnificent. If you wish to understand the guide who will be with you check when there is a tour in English. To buy tickets enter by the door to the left of the stairs to the main door of the Cathedral. Excavations in modern times have revealed an extensive burial ground under the Cathedral which stretch as far as the High Altar. Scholars now think that perhaps the name ‘Compostela’ comes from the Latin compostare meaning ‘to bury’. The Tree of Jesse in the Portal

The ‘Door of Glory’ is the triple portal at the main entrance to the Cathedral through which pilgrims traditionally arrived. It was sculpted in the 12th century by Master Mateo. It is considered to be the finest beauty of the Cathedral.

The Portico has been closed for restoration and is covered in scaffolding at present. There are guided tours to examine the design and intricate stone carving.

6. Pilgrims’ Mass and the Botafumeiro Every day at noon there is a special mass to welcome pilgrims to Santiago. The Mass begins with a long list being read of the nationalities of pilgrims and their starting points. There follows a sung Mass often with many priests who have walked to Santiago also concelebrating. Look out for their boots under their vestments.

Often, but by no means at every Mass, the Botafumeiro is swung. “Botafumeiro” means “incense spreader” and large thuribles were found in many cathedrals and large churches in
the middle ages. The Botafumeiro in Santiago de Compostela is the largest in the world, weighing 80kg and measuring 1.60m in height. In the Holy Years (whenever St James’s Day falls on a Sunday) the Botafumeiro is also attached in all the pilgrimmasses. Eight red-robed tirabolei- ros pull the ropes and bring it into a swinging motion almost to the roof of the transept, reaching speeds of 80km per hour and dispens- ing thick clouds of incense. If you enter the Cathedral by the door from the Plaza Inmaculada the entrance to the Corticela is immediately on your left. This chapel was once a separate church which over the years as the Cathedral expanded became joined to the main building. However it remains a separate parish church with its own parish priest and is not under the jurisdiction of the Cathedral.

The full name of the parish is the Parish of Santa Maria La Antigua Corticela. The church is the church of ‘foreigners, pilgrims and people from the Basque country’. This is the place where pilgrims may get married or have their babies baptised. There are two and entrance is free.

A. Plaza Platerias (beside the Pilgrim Office)

This is the museum of pilgrimages around the world as well as in Santiago.

Both are well worth a visit. This massive edifice was formerly a Benedictine monastery and is now a museum. Construction started in the 10th century. It has a magnifi- cent baldicino over the altar with choir stalls carved in the 17th century. There is a treasury, portrait gallery and representation of the original pharmacy. Exhibitions and the magnificent architecture of Peter Eisenman. The City of Culture is about 30 minutes walking from the Cathedral. The architecture is very interesting. Check in advance if there are any exhibitions to avoid disappointment.

The Museum of Galician life and culture situated at the Puerta del Camino where the Camino Francés enters the medieval city. It is housed in a former Dominican friary.

The Galician Museum of Contemporary Art situated at the Puerta del Camino and opposite the Museum of Galicia. The Eugenio Granell Foundation was created in Santiago de Compostela in 1995 and is housed in a building in the Plaza Toural just along from the Pilgrim Office. As well as art exhibits, the Foundation also offers theatre, workshops for students and diverse groups, chamber concerts, confer- ences, guided tours. With each
exhibit the Foundation publishes a catalogue. The Foundation also owns a growing library principally dedicated to surrealism and the 20th century art.

Santiago is a university town and in term times 50,000 students swell the resident population of 95,000 people. This museum recreates the student atmosphere of the famous boarding house run by ‘Doña Generosa’ in Santiago de Compostela at the end of the 19th century and immortalized by the writer Alejandro Pérez Lugín in his novel La Casa de la Troya. Occupying the right-hand side of the Plaza Obradoiro the Parador began life in 1499 when it was constructed by royal command as a hospital for pilgrims. It remained so until in more modern times it became the headquarters of the Faculty of Medicine of the Universi- ty. Subsequently it became a hotel and part of the Parador network. Therefore it is known as the world’s oldest hotel. The traditional of providing hospitality continues today as the hotel provides 3 free meals per day to the first 10 pilgrims who queue with their Compostela in hand. The meals are provided in the staff restaurant. The Church of Santa Maria de Sar stands by the river of that name. It is the oldest parish church in Santiago and construction began in the 12th century. It is very beautiful and boasts a cloister and museum as well as the church itself. It is open daily for visits.

Just 2 minutes’ walk from the Cathedral lies the monumental church and monastery of San Francisco. Housing a community of friars of the Franciscan Order the buildings date from the 13th Century. As their numbers grew smaller the Franciscans decided on an entrepreneurial initiative and have converted their former monastery into a 4 star commercial hotel which is run professionally. The friars now reside in modern but modest accommodation.

San Francisco is also home to a magnificent museum of the Holy Land, the heart of which is an impressive model of the Holy Sepulchre crafted in Jerusalem over 60 years ago by Franciscan Fray Bartolome de las Heras-Burgos. View of the Cathedral from Alameda Park

The city´s most renowned and admired viewpoint is that of Paseo da Ferradu- ra, located in Alameda Park, on the eastern slope of the Santa Susana hill. From there, there is a spectacular frontal view of the Cathedral rising up majestically over the mass of
historical buildings: it is the most photographed postcard, the city’s timeless image. Recommended at any time of day, this viewpoint is a must at night-time to really under- stand why the Cathedral was and is a spiritual ‘beacon’. Modern religious monument at Monte de Gozo, on its base portraying both the Pope’s visit in 1989 and St Francis of Assisi’s in the early 13th century

Monte de Gozo, called ‘The Mount of Joy’ be- cause it is an elevation of land from which pilgrims can see the Cathedral of Santiago for the first time. There has been a chapel there since 1105. Nowadays Monte do Gozo has some tremendous facilities to accommodate pilgrims, which include a shelter with capacity for hun- dreds of people, restaurant, coffee shop and laundry. It is also the venue for concerts with a capacity of 40,000.

If you wish to walk the last stage of the Camino Francés from Monte de Gozo you can get the bus to the airport and ask them to let you off there.

See all of these places and more by downloading the guide to a 1- or 2-day walk which traces the entrance of the various Camino routes into the city. The route also goes to Monte Pedruso high above the city with spectacular views of Santiago and the surrounding countryside.

Finally, remember to take your credencial as many places with an entrance fee offer reductions for pilgrims. And please check the websites of each location as opening hours may vary with the seasons. Chairman’s note: John, a Scot who now lives in Spain, helped us negotiate with the authorities in Santiago de Compostela as we were getting established. It was through his negotiations that we were able to have our constitution and Pilgrim Record approved. We are very grateful for the support he still gives us, such as this article, which he compiled for us at our request.