The former St John’s Friary at Stade, the start of the Via Romea

About 18 months ago I received a short email from one of our members and at the end he asked “Have you heard of the Via Romea Germanica?” No I hadn’t. I immediately searched for information about it and found a website which had an overview map showing that it left from Stade, a small town about 40kms north east of Hamburg in Germany, headed south over the lowest pass in the alps at the Brenner Pass, and then continued through Italy to Rome. Further exploration found pdfs with detailed maps, and even directions in (Google) English.

A study of the pdfs showed that the elevation in Germany was minimal, and when approaching the Bavarian Alps the climbs were mostly steady rises, following river valleys. Even the Brenner Pass was not overly high (1,370 metres), and it wasn’t till reaching the Apennine Mountains in Italy that the path became more strenuous, with a lot more ascents and descents. I was hooked, and started planning!

Though the original journey was made in 1236, the modern version is a comparatively new route, with an enthusiastic team working on the waymarking, and ever ready to assist the pilgrim on their way. Because it is very much a ‘road less    travelled’ I was aware that it would be harder to negotiate than the well-established pilgrimage routes, but was prepared to take that risk, and so on 23 March the adventure began. 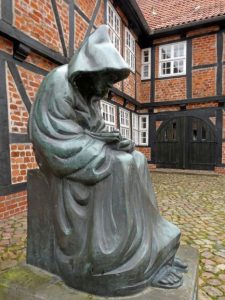 A representation of Abbot Albert of Stade

I had made contact with the ‘info’ email on the website, and in turn my email had been handed around to various people, one of whom was Christina Deggim who I met in Stade, my starting point for this route. It was from here that Abbott Albert departed on his journey to Rome, and Christina, who is in charge of the archives in Stade, had a leather-bound copy of his book for me to see. I could not read it as it was in Latin, but it was an honour to be shown this precious volume. Christina gave me a guided tour of the town and helped, along with Tina, the president of the Via Baltica  Jakobsweg path, arrange accommodation for the next few days.

This is a Way where people bend over backwards to help you. Sigrid, a pilgrim living in Stade, had seen on a Facebook page that I was to start walking on Saturday and so sent a message that she would meet me on the way. She walked with me the whole of that first day, showing me where the albergue was at day’s end, as it was hidden away in the back of the church. 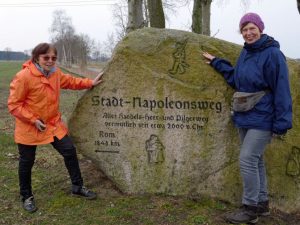 Tina, President of the Via Baltica, and Pilgrim Sigrid

There is no way to avoid long distances on the first few stages of this path. It is a matter of walking until accommodation is reached, and sometimes that might be 30kms or thereabouts. However the compensating factor about this is that it is easy walking, often on grassy paths, but always flat. I well remember how excited I was when on Day 10 of my journey I saw, far in the distance, some mountains! On these first weeks the path goes through farmland, forests, and along some minor roads, from one charming village to another. 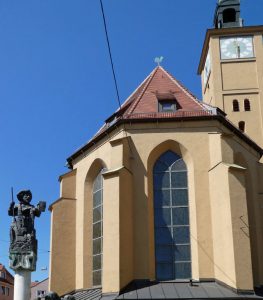 The Augsburg albergue is in the bell tower of St Jakob Kirche
I began walking at the end of March, a month after a monster storm swept across northern Europe. The damage from the storm was evident in the number of felled trees I had to negotiate. Whole areas were levelled, generally all lying in the same direction with the trees just being uprooted, although occasionally the wind had snapped off a tree several metres above the ground. One fallen tree across the path was easy to skirt, but when the path was blocked for 4–500 metres a detour had to be made. Concentration was needed to make sure I returned to the correct path.

In those early weeks I had to be vigilant following the signs. I carried a tablet device on which I had stored all the PDFs and in those days I was constantly referring to them to check that I was still on the correct path. The symbol for the Via Romea is a staff on a blue background (see p.10). The further south I travelled the clearer the signs became as an arrow often appeared with it, though this was not the case in the north. A staff symbol on a pole doesn’t really point the way like the familiar shell or arrow, though for some days I had the comfort of following both the staff of the Via Romea and the shell of the Via Baltica. 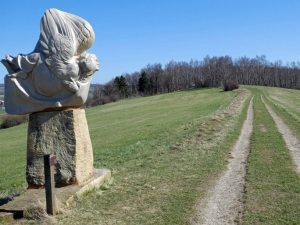 Heading towards the old border with East Germany

The path travels through what was the old East Germany, where, with the older residents in particular, Russian, rather than English, is the second language. That said though, I very rarely had difficulty making myself understood and further south English was very common. I found I was able to communicate with the locals more often than not.

What were the paths like? Very often I was walking on grass or dirt paths, and when the track was on asphalt it was usually on minor roads with little or no traffic. One of the advantages of walking in Germany is the fact that there are often strategically placed seats on which one can have a rest. These rest spots were often places with a view – a view of the village, of the valley, of the vineyards, or of the mountains.

This is a path loaded with history. It crosses, or follows, numerous rivers along the way. The Ilse is a small river that rises in the Harz Mountains, on the famous mountain, the Brocken, but has a big history. It is on this river, not far from the village of Hornburg, that Charlemagne dug a large hole and conducted mass baptisms of his conquests, the Saxons. Granted, there was really no choice for these people as the only alternative to converting was death! This is the river that flows through the delightful village of Wasserleben where many of the streets have a stream running down the side of the road, with bridges for pedestrians, and a ford for the vehicles. This village with its many streams was a surprise, though it shouldn’t have been as the German word for water is wasser.

Further south the path follows the cycle path beside the River Main and the Donau (Danube), lined with vineyards, and passing through wonderful villages such as Schweinfurt, Würtzburg, and Donauwörth. The town of Donauwörth is where the Via Claudia Augusta is recognised as beginning – an ancient, very important Roman commerce route through the Alps to the River Po in Italy, now a very popular cycle route.

From Augsburg the path begins following the Lech, a fast flowing but very quiet river, other than when it is flowing over the various weirs on its course. After several days it is crossed for the last time at Schongau. At this village the Via Romea crosses the München Jakobsweg, and as I was leaving, late on a Sunday afternoon, I joined others waiting to welcome a long line of pilgrims who had made the journey from the Benedictine Abbey at Kloster Andechs.

The route goes through many historic villages. Places like Augsburg rebuilt after its near destruction in WW2, the medieval village of Rothenburg ob der Tauber saved from destruction in WW2, the walled villages of Dinkelsbühl and Nördlingen, and Oberammergau, the home of the Passion play held every 10 years. Then of course there are the many other picture postcard villages such as Wölfenbüttel, Wernigerode, and Bad Landsberg to name a few. 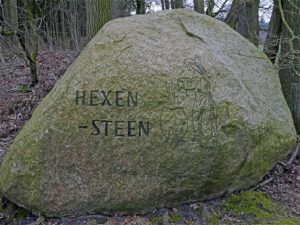 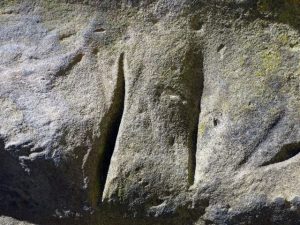 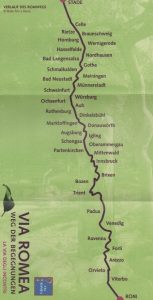 After Mittenwald the way crosses into Austria with its high mountains lining the valleys. Again, though in steep countryside the path was not too arduous until the climb up to the Brenner Pass. That day there were a couple of steep nips due to the fact that the path was kept away from the roads on the valley floor. Once leaving Innsbruck and the River Inn there was a fairly constant view of the autobahn, and in fact the path crossed under it a number of times as it headed up the valley to the pass. The last stretch up to the Brenner Pass is actually on the road. My notes said it wasn’t too busy during the week – but the only trouble was that I happened to be on it on the weekend. I only went part way up this road before hitching a ride in a police paddy wagon for a few kilometres to the Brenner See, where I knew the path left the road and went around the edge of the lake leading to Brennero, the border village! 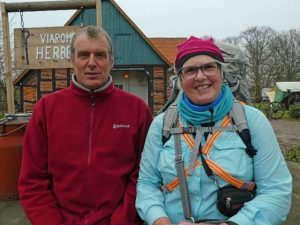 Janet with Torsten
The people I met were kind and generous. I only stayed in a few albergues as there are not too many pilgrim premises, though no doubt in future there will be more and more. In the little village of Bröckel I stayed in the home of Torsten who is busy building an albergue in an old gypsy style caravan. I stayed in church buildings, one where the choice was to sleep on the floor or on the sofa, and in private homes. In Scheeßel, Reinhard welcomed me into his home after he had seen me perusing the information board looking for somewhere to stay, and Christoph & Gisela willingly put me up and provided both dinner and breakfast for me in Wernigerode.

In Augsburg I stayed in the albergue attached to St Jakob Kirche (St James Church) and had the privilege of a guided tour of the city by Friedrich the Pastor of the Church. This was a rarity in this part of the journey though as this is a very tourist orientated area and many times the only accommodation was in a fairly high priced hotel. Had I booked ahead I could have perhaps got a cheaper room, but that would have meant having to stick to a fairly rigid timetable, which I was reluctant to do.

This is a beautiful Way, very much a road less travelled, but peopled with locals interested in the journey and willing to assist with information and practical help. Through Germany the terrain is comfortable, though sometimes signs are lacking and so one needs to keep alert. It is only in the last few days, heading towards, and into, Austria, that it becomes more strenuous, though in my opinion it is not as arduous as the Via Francigena crossing Switzerland. It has much history associated with it, and as well as passing through some lovely countryside there are many fascinating historical villages to explore. If you are looking for a pilgrimage route that falls into the ‘road less travelled’ category, the Via Romea Germanica could be for you.

View Part 2 of this article. 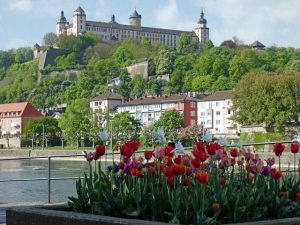 Marienberg Fortress, on the opposite bank of the River Main, Würzburg 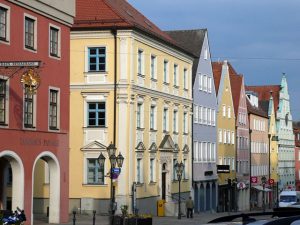 Reichsstrasse, Donauwörth. The old Roman Road – part of the Via Claudia Augusta 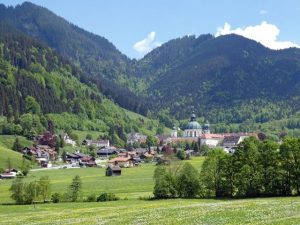 The village of Ettal, near the Austrian border 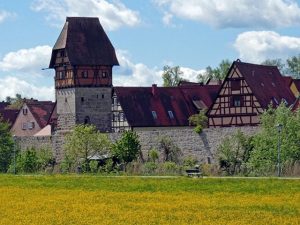 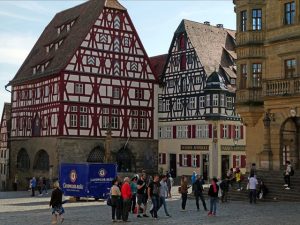 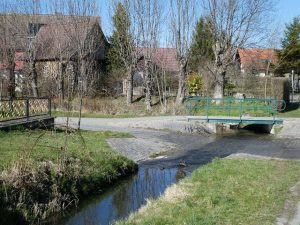 Wasserleben
Australian Friends of the Camino