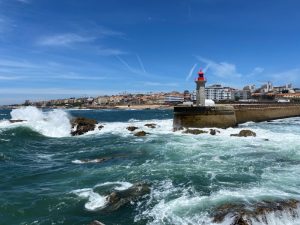 Where does a journey begin? This one started with the purchase of a return ticket to Spain in the middle of 2019, hoping to walk part of the Via de la Plata in December that year. I eventually decided that I felt more drawn to the Camino Portugués, and I walked from Santarém to Porto between 29 December 2019 and 9 January 2020— hoping to return the following December to complete my pilgrimage. Little did I know then that my plans—like many others—would be interrupted.

Two years and three months after leaving Porto, I was indeed fortunate to be able to return to this wonderful city to begin the second part of my Camino Portugués— walking 280km along the Portuguese coastal route and the Spiritual Variant (Variante Espiritual). The coastal route is actually comprised of two paths: the Camino da Costa and the Senda Litoral. Although these paths intersect regularly— particularly in larger cities and towns—you need make a choice between one or the other each day.

The Camino da Costa is the easiest path to follow and runs parallel to the coast rather than hugging it. It passes through the hill country, offering opportunities to enjoy forests, fields, and other more rural environments. The Senda Litoral (lit. “coastal path”) is predominantly flat and not as clearly marked as its companion, although if you keep the North Atlantic coast on your left, you can be sure that you are heading in the right direction. On more than one occasion I found myself torn between the two paths and ended up crossing between them—not always an easy thing to do. 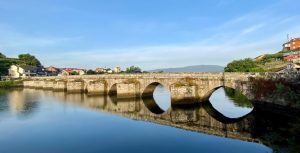 I spent five days walking in Portugal and enjoyed the boardwalks, windmills, and beaches. I took advantage of my proximity to the ocean and enjoyed fresh seafood regularly, combining it with a glass of Vinho Verde—wine from this region that is bottled young and that is light and refreshing. I didn’t see many pilgrim menus along this part of the walk, but there are reasonably priced options available. Quite a bit of walking on cobblestones and, not being as attentive to my feet as I should have been, also led to my getting a number of blisters.

Once I crossed into Spain by taxi-boat from Caminha, my Camino and the landscape began to change. The Spanish coast seemed more rugged and the beaches less manicured. I knew a little more of the language—though it took me several days to switch from obrigado  to  gracias.  I  also found myself amidst a flow of familiar faces. I enjoyed the seaside village of Oia, and the wonderful hospitality provided by Tanya Valdes at La Cala—A Pilgrims Inn. I also explored the bars and restaurants in the old towns of Baiona and Vigo—both highlights— before rejoining the Camino Central at Redondela. 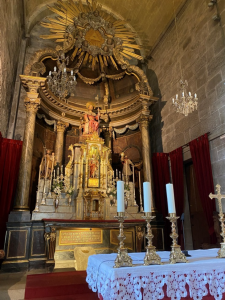 I’m sure anyone who has walked the Central route will be familiar with the medieval bridge over the River Verdugo at Pontesampaio. Most pilgrims cross it on their way from Redondela to Pontevedra—both popular stage ends. Having walked this part of the Camino Central in 2018, I was looking for something out of the ordinary and I found it there. The Pontesampaio albergue is quite new and extremely well designed. The bridge, cafes, and a riverside park, with a bar on wheels all combine to make a great place to pause your journey along the way.

In Pontevedra—sometimes described as a smaller Santiago de Compostela— I caught up with fellow Australian pilgrim Lindsay Teychenne. We had first met in Porto, but since Lindsay was walking the Camino Central, our paths didn’t cross again until now. Lindsay and I both share a passion for the Camino and enjoyed some great conversation accompanied by tapas and a glass or two of Mencia—a Galician vino tinto (red wine). Noticing there was only one piece of bread left on the table, Lindsay asked if I wanted to share it. He took the bread, broke it in half and handed a piece to me.

The Spiritual Variant is an alternative path departing from the Camino Central just after Pontevedra and rejoining it just before Padrón. It has been recognised as an official Camino route since 2013 and takes pilgrims through the Rias Baixas region of Galicia, famous for its Albariño wines. The highlights on the first day include the monastery of San Xoán de Poio, with a remarkable 80-metre-long mosaic of the Camino Francés, and the fishing village of Combarro, famous for its beachfront Hórreos (granite granaries on stilts). The day ends with a steady climb up Mt Castrove. 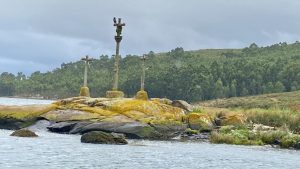 At the heart of the Spiritual Variant is the breath-taking Route of Stone and Water, where pilgrims find themselves immersed in a world of cascading water, abandoned water mills, and verdant greenery as they follow a crystal-clear stream downwards from Armenteira to Barrantes (about 6.5km). Once the path reaches the River Umia passes through picturesque vineyards and fields of maize until it takes a more pedestrian route along quiet roads to Vilanova de Arousa.

The Spiritual Variant concludes with a 90-minute boat ride to Pontecesures on the third day. This route is known as La Translatio (“the transfer”) and—according to legend—is believed to follow the path of the stone boat without rudder or sails which carried the body of the martyred James, accompanied by his two disciples Athanasium and Theodore, to Padrón. The route passes a series of cruceiro—stone crosses— many of which are on small islands and form a maritime Stations of the Cross. 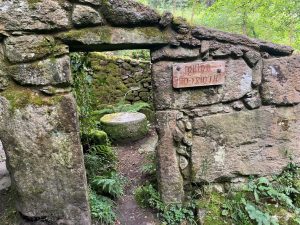 When I got off the boat in Pontecesures—less than 30km from Santiago—and fell in with the flow of pilgrims walking the Camino Central, I felt a real sense of excitement. There was an energy that a few hours ago had not existed. I quickly reached Padrón, the place where James’s disciples moored their boat while they sought permission to bury the saint’s body from the local queen Lupa. The stone (pedrón) to which the boat was allegedly attached can be found in Igrexa de Santiago and in the name of the town. I spent my final night at Albergue O Lagar de Jesus enjoying a pilgrim meal and wonderful hospitality.

When I arrived at the Cathedral in Santiago on Monday 20 June after an uneventful walk in the rain, I had a strong feeling of satisfaction. I felt good in my body— especially my feet—and I had found my stride. I also felt like I’d simply reached a marker on my journey and that there was still more to come. That evening I got to meet Leigh Brennan, founder of the Camino Café Podcast. She had interviewed me last year and we are both part of an online pilgrim community—but we had never met in person.

The following day I headed off to Muxía, where I rested, enjoyed walking without a pack and continued to journal. Muxía is a special place and is home to an important Camino legend. After little success spreading the gospel in Galicia, a dispirited James was walking by the sea in Muxía when the Virgin Mary appeared to him in a stone boat offering him encouragement and promising to be with him. This story is remembered in the Santuario de la Barca (“sanctuary of the boat”) and having received the final stamp of the Camino there, I was ready to return to Santiago. 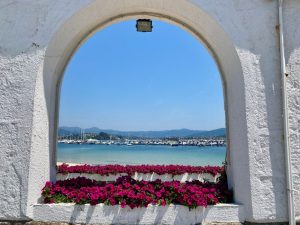 On my final day in Santiago, I visited the Pilgrim Office to attend Mass in English in the Chapel there. This Mass is part of an outreach to English speaking pilgrims offered by the FCJ Sisters and called Camino Companions. The sisters and volunteers provide a quiet space for reflection, conversation, and a cup of tea on the first floor of the Pilgrim Office. I have found this sort of reflection, as well as daily journaling invaluable in helping me integrate lessons learned on the Caminos into my daily life. I was asked if I would like to read the Psalm as part of the Mass and was more than happy to do so. I love the Psalms and had been singing and praying Psalm 23 daily since I saw a father with a staff walking with his children while I was still in Portugal (The Lord is my shepherd…). Its themes of presence, providence, simplicity, guidance, compassion, hospitality, and reassurance in the face of fear echo so much of my Camino experience. Not knowing what the psalm of the day was, I approached the lectern to make sure that I was familiar with it. I looked down at the words on the page and there before me was Psalm 23!

My constant companion on this pilgrimage was the Osprey Levity 45 ultralight pack that I won at the Australian Friends of the Camino National Conference in October 2019—something for which I am truly grateful, especially since I have been known to pack more than I need.

ED: To follow Mark’s journey, A Pilgrim’s Path, see facebook.com/lifeisapilgrimspath.
His videos are at youtube.com/channel/UCR5ejPUfDZ9HrlGBfhinjEw 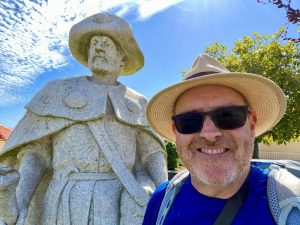 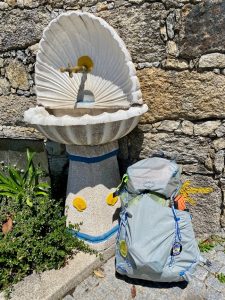