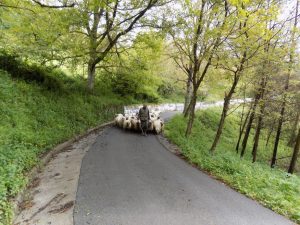 Blue heeler herding sheep on the way to Bilbao

My eldest daughter, Laura, lives in Abu Dhabi and travels the world flying with Etihad. A very sophisticated young lady.

We were both excited when she managed to take a week off in spring to walk with her father for a week on the Camino del Norte. What a wonderful chance to spend time together.

Fitness was not a problem for my daughter and the only concern would be my ability to keep up with her.

We met at Abu Dhabi after not seeing each other for several months. A won- derful moment. After a midnight arrival, it was an early start to catch our train from Chamartin, Madrid, to San Sebastian. San Sebastian is beautiful. A long walk around the bay to stretch our legs and take in the wonderful sights and bars in the city.

Bright and beautiful the next day and an uphill to get out of San Sebastian and a chance to take in the stunning coastline for lunch in Zarautz. Another long walk around the beaches and our first night at Getaria. 28 kms on the first day may have been a bit much. But we relaxed and had dinner overlooking the beautiful beach and harbour. 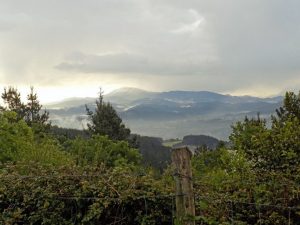 On the way to Guernica just before a storm

The next day was breathtaking, taking in the wonderful scenery along the coast to Deba. The weather remained kind. It was Anzac Day. We recited the Ode overlooking the Bay of Biscay remembering my father and grandfather who both served. We talked of their commitment and courage. Being so far from home reinforced our remembrance.

Well, the good weather could not last and the trail started inland and uphill. By the end of the day we were feeling the cold and welcomed our stay in Markina.

It only became worse from there. Heavy rain and very cold all the way to Guernica. Beautiful country but long climbs and plenty of mud. Way- marks became few and far between. There are no   towns   and    by  the time we reached Guernica we were cold, wet and just a little bit miserable. This trip was character building. But we managed a laugh at the end of the day. After arriving at Guernica, we were shocked to hear air raid sirens wailing. It turned out it was the 70th anniversary of the bombing of Guernica by the Luftwaffe in the Spanish Civil War. Guernica turned out with street parades with soldiers in civil war uniforms and weapons and generally had a good time. The atmosphere was great. 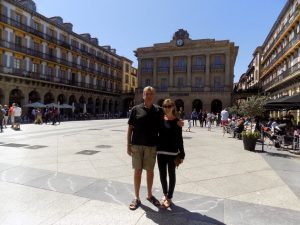 Guernica to Lezama continued in rain and wet weather until finally we walked onto a reasonably flat trail. Our last day walking together was short, after a night having dinner with some Irish and American pilgrims. My daughter was starting to enjoy the companionship of pilgrims.

A short walk the next day to Bilbao and a nice dinner and hotel. We toured the Guggenheim and walked along the river and explored.

All of a sudden it was over. I accompanied my daughter to the bus depot for her trip back to Madrid. I had an overwhelming feeling of sadness and loneliness as she departed.

We had talked and remembered a lot of the beautiful time we had as a family. There was nothing too philosophical but it made me realise how quickly time passes and the hold on our kids is fleeting.

It also made me realise what a wonderful job my wife had done instilling values and raising my two girls. My daughter thought I was mad walking for over another 4 weeks to Oviedo, Lugo and Santiago de Compostela. Notwithstanding, it was another Camino successfully completed and made all the more mean- ingful by spending a wonderful week with my big girl.